If this doesn’t give you a warm gooey feeling, you’re dead inside.

Posted on January 19, 2006 | Comments Off on If this doesn’t give you a warm gooey feeling, you’re dead inside. 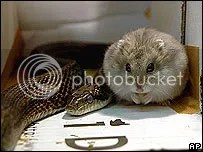 A rodent-eating snake and a hamster have developed an unusual bond at a zoo in the Japanese capital, Tokyo.

Their relationship began in October last year, when zookeepers presented the hamster to the snake as a meal.

The rat snake, however, refused to eat the rodent. The two now share a cage, and the hamster sometimes falls asleep sitting on top of his natural foe.

“I have never seen anything like it,” a zookeeper at the Mutsugoro Okoku zoo told the Associated Press News agency.