Pippi, Flicka, Freya and all

First of all, let me just say that I maybe should have planned to spend two weeks “in” Sweden, because we could easily spend the entire week just on Norse mythology without ever eating one meatball or Dancing one Queen. We started off strong yesterday with brief introductions to Pippi Longstocking (via the cheesy but loveable 80s movie), the Tomten (via this picture book) and Thor and Freya (via my brain and the internet). Pippi was, of course, a big hit – who doesn’t love a crazy chaos-making redhead with a highly individual sense of style? Stupid people, that’s who. The Tomten was deemed slightly less awesome, until they associated him with Bilbo (the slightly adulterated Bilbo from the stories my mom tells them, rather than the echt Tolkien version), and then they wanted to know more. (Ellie wrote a cute little story about meeting a Tomten in the back yard one night and going on an adventure for her writing time today.)

Freya and Thor were chosen because both girls are big fans of The Avengers, so they sort of already know who Thor is, in a Marvel-comics kind of way. Also, I have always really dug the idea of Yggdrasil, the world tree (I mean, I got it tattooed on my forearm, for god’s sake) and I found a really lovely artist’s conception that I kind of want poster-sized in my bedroom but is also a good visual introduction to Norse mythology for kids: 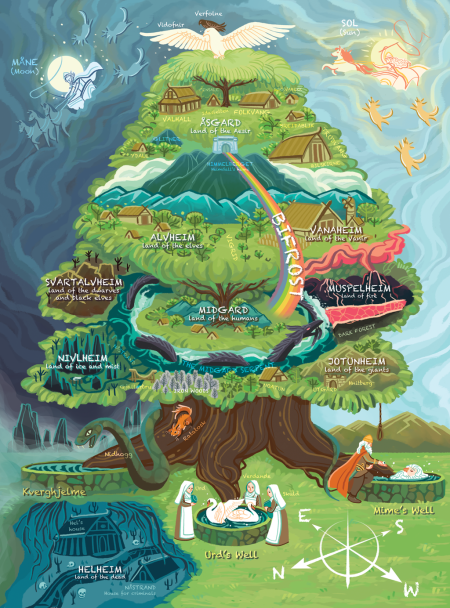 Seriously, isn’t that gorgeous? I was raised from a wee child on Greek mythology (that’s what comes of having a father who specializes in Ancient Philosophy), so I know my Olympic pantheon backwards and forwards, but I never really dug into the Norse myths beyond what I absorbed from Tolkien, Lewis, and MacDonald (as a kid), and Ibsen and Strindberg (as a college and grad student). Which is to say, not bloody much … as might be indicated by the fact that I told Ellie and Sylvia that Freya was “kind of Thor’s girlfriend, I think,” last night over dinner, which is not so much correct as it is the opposite of that.

Still, both Thor and Freya are pretty bitchin’, and this gives me the excuse I was looking for to get D’Aulaire’s Book of Norse Myths, so I’ve got that going for me, which is nice.

The other thing that’s nice is how many of my friends and acquaintances are jumping on this summer camp bandwagon, by which I mean sending me free resources that I can use. One of my besties from high school is doing a similar world tour with her kids this summer, and just sent me a pile of Mexico coloring sheets (thanks, Gina!); I’ve gotten Swedish recipes from one friend, a book on India from another, and links for language, food, and craft sites from various and sundry people. Most of whom aren’t even related to me! Keep it up, I say – the more the merrier, and lord knows I need help filling the considerable gaps in my knowledge.

Today was more low-key, Swedish-culture-wise, largely because we all woke up on the crab-ass side of the bed this morning and I could not deal. We went to IKEA for lunch (kids eat free on Tuesdays!), ate some Swedish fish, read Snip, Snap, Snurr and the Red Shoes, had an ABBA dance party, and called it a day. Tomorrow we hit the American Swedish Institute and make Midsommar flower wreaths for our hair. Framåt!

Like Loading...
This entry was posted in Summer Camp and tagged Freya, Sweden, Thor, Yggdrasil. Bookmark the permalink.

2 responses to “Pippi, Flicka, Freya and all”