Well, THAT was a colossal waste of time

Called the Apple store at 11:00 to see if they had any iPhones. Was told they had “lots” of all the different models, and to “come on down.” Called Mr. Squab and told him to meet us there. Got to Mall of America and saw line in front of store. Got in line, was told I was “lucky” because I was the last one to get a phone that day. What if I need two phones? “Oh, nope, sorry, we only have seven and you’re number seven.” Try to understand how seven constitutes “lots,” with no success. Meet Mr. Squab and tell him the deal. Try to go to food court for lunch so Hatchling can get chicken nuggets and fries, normally her all-time favorite meals. Hatchling has complete, total meltdown – the worst she’s ever had, by a long shot – in the food court, working herself up to the point where she could not eat or drink. Mr. Squab and I cram our food down (did I mention that I was insanely nauseated this morning?), pack up the Hatchling’s food, and carry a screaming, thrashing toddler out of the mall and back into the car. Mr. Squab goes back to work; the Hatchling and I go home, where she sits in her chair watching Sesame Street and eating her lunch like a perfectly normal child, and promptly puke in the garbage can.

Happy fucking Friday to me.

Comments Off on Well, THAT was a colossal waste of time

Posted in trials and tribulations

Welcome to my rollercoaster

Posted on July 24, 2008 | Comments Off on Welcome to my rollercoaster

I thought, when I was contemplating gestation the secomd time around, that it would be easier. You know, I’ve done it before, I have some idea of how my body responds to it, I know what to expect when I’m expecting, etc., etc. Surely, this time would be at least a LITTLE less fraught with anxiety.

Turns out, to the surprise, I’m sure, of exactly no one who knows me, that my ability to angst about something completely trumps any past experience with it. And pregnancy, which floods your brain with teh crazy ANYWAY, is, like, custom designed for me to worry about. Right now, for example, I’m convinced I’m having another molar pregnancy. (For you new readers, I had one of those before I had the Hatchling, which you can read about here.) My rationale for this belief? (Or “rationale?”) Simple, really: I had some spotting earlier this week (actually pretty normal in the 1st trimester), I’ve been INCREDIBLY nauseated (ditto), and the universe hates me (see: teh crazy). Now, because I’ve had a molar pregnancy in the past, I’m actually slated to get an ultrasound when I go in for my initial doctor’s visit on the 4th. I’ll be 7+ weeks at that point, so they can probably detect a heartbeat and they can certainly rule out a molar pregnancy. This is good, because the nausea plus the anxiety have pretty much made me a wreck this week. Just last night I had to cancel on a dinner date with some girlfriends that I was REALLY looking forward to, because I was at a point where even thinking about food made me want to hurl. Where’s the fun in that?

One thing that’s been handy is the archives of this blog. I was checking some of my earliest posts to see if I was really feeling sicker than last time, and of course I wasn’t – I’d just forgotten, in the way that you do forget things like how much pregnancy and labor SUCK ASS, because if you didn’t forget a little the human race would have died out sometime around the lifespan of Lucy. So it’s good that I catalogued it all for reference this time around; but I’m still going to be a lot happier once I can get those ultrasound results. Feh.

Comments Off on Welcome to my rollercoaster

1. Saw Mamma Mia on Friday with BFF and BSL (best sister-in-law). Had a blast singing along to ABBA and wishing that I would EVER be as beautiful as Meryl Streep. Is it silly? Yes. Can Pierce Brosnan sing? Hell, no. But he’s still damn cute, and it was a fun, popcorny, summery movie.

2. Saw The Dark Knight last night with Mr. Squab. Holy, holy, holy CRAP is that a good movie. If Heath Ledger doesn’t get an Oscar nom for playing the Joker it’s a crying shame.

3. The nausea, she has kicked in. I have to eat a little something every 2-3 hours, or Bubba gets cranky. How can something the size of a sesame seed get so mad? Why are my children so forceful practically from the moment of conception?

Comments Off on Weekend Recap

OK, here are the details, insofar as we even have any.

– We JUST found out. I had told Mr. Squab before I left for GA that I thought I might be pregs, but it was still a little early to take a test. Then, when I was down south, I mentioned to my stepmom that I was kind of thinking of getting a pregnancy test, and well: you just can’t SAY something like that to my stepmom if you don’t intend to follow through. So we got the test, and I took it, and it was positive, and I tried calling Mr. Squab but he wasn’t by the phone, so I took a picture of the results with my phone camera and sent it to his phone. (His initial reaction: “Oh, my GOD.”)

– I’m about 4-5 weeks along. Very early days; haven’t even had my first doctor’s appointment yet. Early enough that I’m still half-expecting to have started my period every time I go to the bathroom. (Gross, but true.) Early enough that a lot of people wouldn’t even be talking about it yet. But fuck it, I’m too tired to keep that big a secret from y’all for that long. If it doesn’t last, I’ll blog that too.

– If everything goes as planned, we’ll be welcoming baby 2.0 sometime in late March 2009.

– So far I’m just having a little nausea, but I expect that will ramp up this week to the full-blown, total food aversion I had last time, because my body is super fun like that. Expect much bitching to ensue.

– We haven’t completely settled on a pre-natal name yet, but in keeping with the grand tradition of “Hoss” (the Hatchling’s pre-natal name), we’re leaning towards “Bubba” this time around. It has that nice, slightly hick ring to it, no?

Comments Off on Ok, ok.

On a Brighter Note … 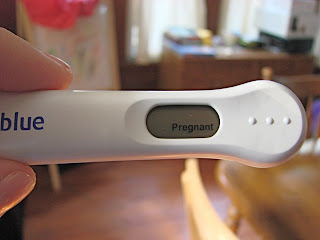 Comments Off on On a Brighter Note …