The Squotient Triangulum, Part I

Posted on October 24, 2005 | Comments Off on The Squotient Triangulum, Part I

Why, you might ask, is this blog called the Snarky Squab? Believe it or not, it’s not due to a strange affinity to baby birds. No, the story is much more complex than that …

When I was in grad school at UC Santa Barbara, I lived in a cute little bungalow in downtown Santa Barbara with two housemates and three cats. Two of the cats were mine, and one – the youngest – was owned by one of the roomies. That cat’s official name was Anastasia, but we never called her that. She was a squat, round, fluffy little bunch of a kitty, and we always called her “Squab” or “Squabby,” because that’s what she looked like: a rumpled and vaguely sleepy little baby pigeon. Soon, we came up with similar nicknames for the other kitties: Oscar, who was lithe and lean and deigned to sit on your lap only occasionally, was dubbed “Squinny,” while Max, who was 23 pounds of grumpy purr-factory, was dubbed “Squotund.”

It wasn’t long before we realized that the kitty personalities were eerily reflected in the personalities of the housemates: One of us was squabby (perpetually procrastinating, loved to nap, very cuddly), one squinny (very orderly, elegant in attire, top of the class), and one squotund (calm, down-to-earth, reliable). Soon, we began to see that this triumvirate of qualities was applicable to nearly everything. Not only could all of the people we knew be classified according to this typology, but so could cities, clothes, food and drink, music, movies, plants – the list went on and on! Clearly, we had an idea of major world importance* on our hands. Forget Meyers-Briggs and the MMPI: Welcome to the Squotient Triangulum: 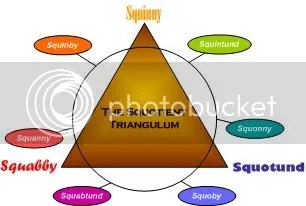 As you can see, the Triangulum is a spectrum. Most things and people have a dominant type as well as a secondary type, while some people may be true blends of two: Squinby or Squabtund, for example. Tomorrow: a breakdown of the three major categories.

*Yes, this is tongue in cheek. But only a little bit.