If there’s a more depressing way to come home from vacation than having to put your cat to sleep, I do not want to know what it is. We got home from the cabin at around 11:30 yesterday morning, looking forward to having a couple of days to settle in and get the Hatchling back on something approaching a normal sleep schedule. Oscar, our healthy cat, pranced right up to us meowing “where the hell have you been?” and other feline remonstrations. I could hear Max (the unhealthy one) meowing, too, but I couldn’t see him. I checked under his favorite chair, and there he was, looking just god-awful terrible. In addition to the thyroid medication we’ve had him on, he’s also been taking antibiotics for the past two weeks, to try and rid him of a mysterious infection that’s been plaguing him. The antibiotics helped some, but not enough, and I was feeling very uneasy about leaving him for a week. But we had people looking in on him, and Mr. Squab drove back to the house mid-week to make sure everything was OK, and he seemed to be, if not getting better, then at least staying about the same. But as soon as I got him out from under the chair yesterday, I could see what we were going to have to do. He looked terrible, like a cat skeleton covered in fur. He could hardly lift his head up and was having trouble walking. Most telling of all, he wasn’t purring anymore – and this is a cat who purrs at any and all times, like even when the vet is sticking a needle into his leg. Up to this point, with the feline diabetes a few years ago and even the initial thyroid treatments, he’d retained his personality and really didn’t seem to mind the pills and shots. I know some people would have put him down years ago, but I couldn’t see doing that just to save myself the trouble of administering twice-daily doses of medicine. He’s never been the healthiest of cats, but he always seemed happy to be alive, not in pain or anything. But yesterday was different. He’d been declining, and now he was clearly at the point of no return. He didn’t want to be held, he wasn’t eating or drinking, all he had the energy to do was find a quiet spot and lie down. I told Mr. Squab to call the vet and tell them we needed to schedule an appointment to put him down. And then I sat on the sofa and bawled my brains out. The vet is only open until 1:00 on Saturdays, so we quickly called BFF to see if she could come over and watch the Hatchling, put the Hatchling down for her nap, and got Max into his carrier. I could not stop crying. It’s not like I hadn’t been prepared for this eventuality; I could see that he was declining and I knew this was the likely outcome, sooner or later. But it still felt just terrible. Max was meowing in the carrier – he hates it in there – and I kept saying, “It’s OK, Maxer, we’re going to make you feel all better” and then dissolving in tears all over again. We got to the vet’s and they couldn’t have been nicer, telling us they were so sorry, and bringing us tissues. They put a catheter in Max’s leg and let me hold him for a little while before they administered the overdose of sedatives. The vet was one we’d seen before, and she said there must have been some other underlying condition that they hadn’t caught, he’d gone downhill so rapidly. She was sorry, too, and told Max to say hi to her cat and two dogs that were on the other side. She administered the dose and in only about 10 or 15 seconds Max was gone. He was so weak it took hardly any time at all. They let us sit with him until we were ready to go, bringing us more tissues. It was maybe the saddest thing I’ve ever done. My eyes were still swollen this morning, and I’m crying now as I write this. I know it was the right thing to do. Funny how that doesn’t make me feel any better.

I’ve decided to look at this as the end of a pretty crap summer rather than an inauspicious beginning to autumn. Because I really, really, really need this coming season to be better than the last one, you know? 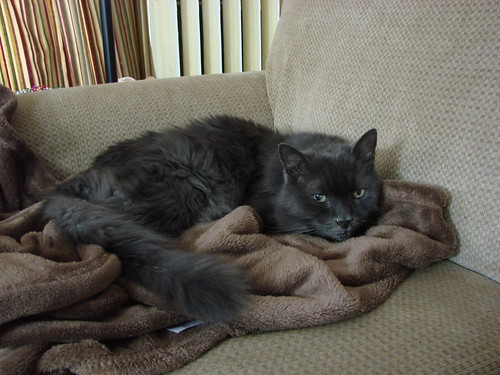