Today, you are ONE YEAR OLD. Jumping Jehosaphat. I can’t believe it’s only been a year. I can’t believe it’s already been a year. I remember this time last year like it was only weeks ago: getting pitocin to induce labor, the doctor using that weird crochet hooky thing to break my water (I actually thought that was pretty cool), barfing from the labor pains (not so cool) getting the epidural (extremely awesome, so much so that I think I asked the anaesthetist to marry me), and then pushing and pushing and coming soooo close to getting you out. And then your head got stuck and wouldn’t budge, and after three hours of pushing it started to swell, and we had to have a c-section after all. And that was really just NO FUN AT ALL. They don’t tell you in birthing class about the deep, to-the-bone chill you get from the anaesthesia, how your teeth can’t stop chattering because you’re so, so cold; or the nausea and attendant ralphing that happens when they’re wrestling with your intestines to get to the baby inside. Not that it mattered, because pretty soon there your little head was, popping right out of me and talking up a storm right from the moment you hit the air. (“It was like a scene from Alien,” says Mr. Squab.) And then they pulled the rest of you out of me and I didn’t have my glasses on so I couldn’t really see you and everyone was telling your father to tell me what flavor you were, only he was kind of delirious and couldn’t really tell so it came out kind of like “it’s a … girl?” And I was really surprised, more so than I’d thought I would be, but SO excited, because there you were, our own sweet baby girl, and now we could really get to know you. 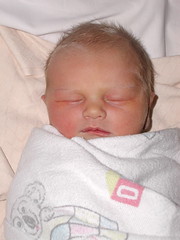 You were pretty damn cute right from the beginning, I must say. Which was a good thing for all concerned, because while you were a model child in the hospital, once you got home we had some trouble in the eating department. My milk just didn’t come in the way it should have, and your tongue was tied, and oh! It was a struggle for both of us. I remember numerous times trying to nurse you before going downstairs to show you off to some of your many admirers, and crying and crying to your father that I just couldn’t DO it, it just wasn’t working, and why was it so hard? And then trying to compose myself and put my hostess face on and tell the guests about how wonderful it was to have you home. Stupid social conventions. Daddy was a big help, though, even while he was having a small freak out at the fact that he was a father now. Which, let’s face it, is a pretty big deal. 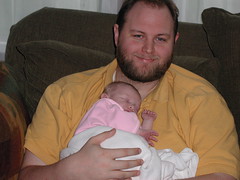 We figured the eating stuff out eventually, though. Just in time, in fact, because around about 6 weeks you decided to hell with being out of the womb, this whole external world thing sucked, and could we please just go back to how things were? Which you expressed by crying. All. The. Time. I look back at posts from that period and think, yeah … maybe one kid is all I need. Frankly, it was rough going for a while there, and if putting you back in for the “fourth trimester” had been a viable option, believe me, we would have strongly considered it. No sleep, no idea how to GET sleep. A general sense of not knowing what the hell we were doing – and your daddy and I aren’t generally used to that feeling. Nor do we really enjoy it. In fact, it pretty much blows. So like I said, it’s a good thing you were so damn cute. 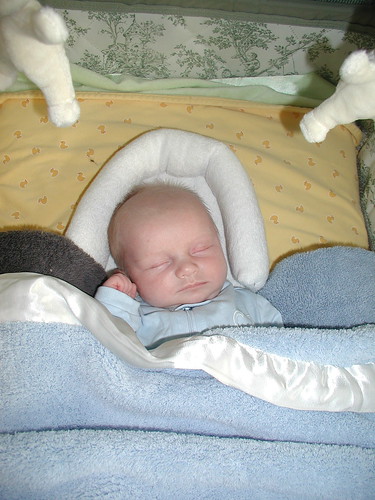 However. I can’t really complain too much, because while the first three months were less than blissful, and you didn’t sleep so much until about 5 months, you’ve always known how to balance out the bad stuff with a killer smile or a sweet coo, and your father and I have spent the last 7 months being amazed at how lucky we are to have such a good baby. It’s not just that you’re good natured, though you are that. It’s that you have such a large capacity for enjoyment. You’re one of the smiliest babies I know – people remark on it all the time – and you really just get a huge kick out of most things, be it new activities, new foods, new people, or a cool new seat. 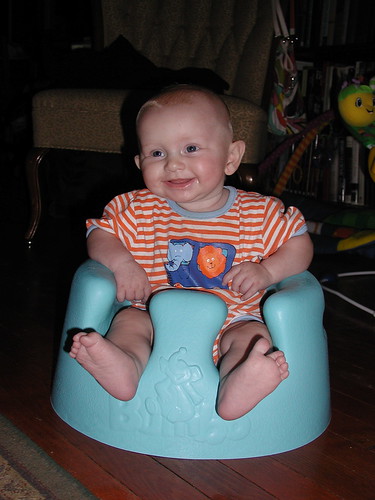 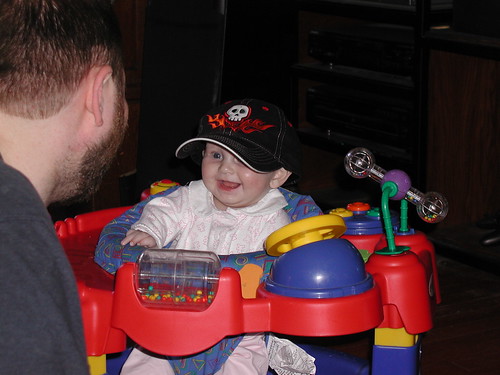 Looking back, I can’t believe how much we’ve done with you even at at tender age. Two cross-country plane trips. One new country (Canada, but still). Two family weddings. Gadzoodles of road trips, from 90 minutes to 5 hours at a pop. As someone who prefers to avoid fuss and bother whenever humanly possible, these are things I’m kind of surprised I had the mental energy for. But we did it, and you came up trumps every time. 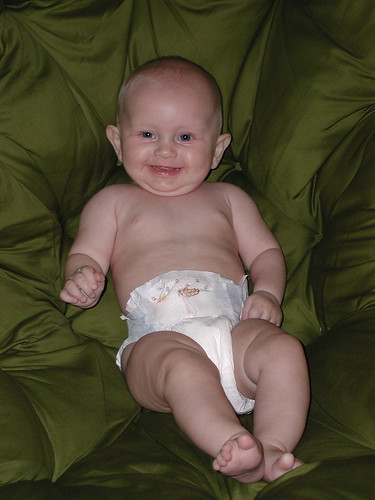 One of the best things about having you around has been the opportunity to watch your personality develop day by day. I can remember in the first months talking with a friend who had also just had a baby, about how sometimes we worried that we might not recognize our own kids right away in a group. Much as we loved you, nigh unto worship, it nevertheless remains that teetiny babies are much alike in their adorable lumpitude. But lord, that didn’t last long! You’re most definitely a little person now. There’s no mistaking you for anyone but your very own self: sweet-natured, strongly opinionated, probably foul-mouthed and with a notable penchant for cheesy poofs and kitties (to eat and play with, respectively). 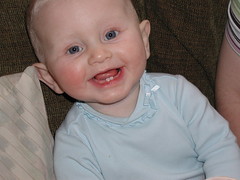 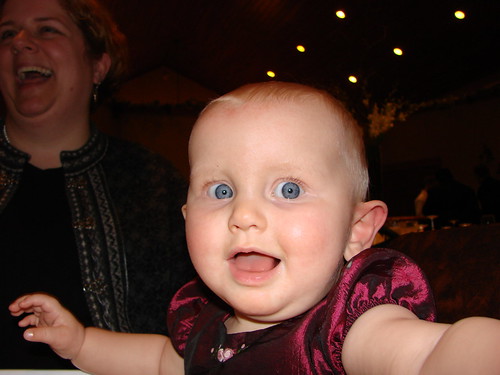 Even the normal baby milestones you have to hit in your own way. Teeth? Sure! How about we start cutting them insanely early and then keep going until we have a whole mouthful? Crawling? No, thanks. You preferred to stand at about three months, unassisted at 9 months, and walking (hopefully) any day now. Talking? Actual “words” are so limiting; you disdain them. Far more fun (and practically as communicative) to babble all the livelong day in your own unique Hatchling babycabulary. I imagine at some point in the near future – but not before you’re good and ready – you’ll suddenly start spouting entire sentences out of thin air. Just because you’re contrary like that. 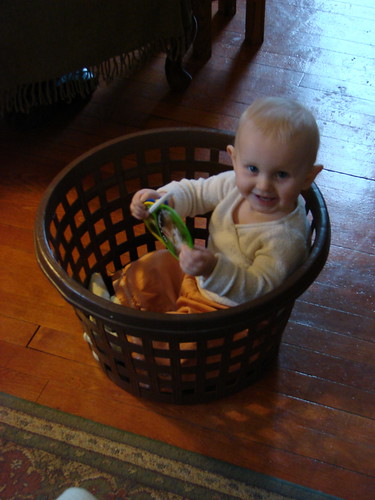 Milestones this month: no more third nap! You’re down to a mere 11-12 hours a night plus two 90-120 minute naps each day. No one can say you’re sleep deprived. You’re about *this* close to walking, which isn’t close enough to take any solo steps, but is close enough to make you royally pissed off that you can’t get where you want to go on your own. You’ll see something you want across the room, cruise along the coffee table until you get to the end, wave one or both arms and cautiously lean in the direction of the desired object, realize you can’t get to it without help, and then whammo! Insta-tantrum. It’s like living with a small, grumpy, non-verbal maharajah: all we can do is salaam and distract you with something shiny. Fortunately, that’s not too difficult to do. 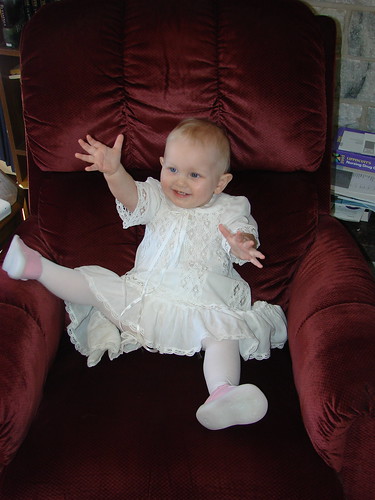 Favorite things this month: Going to the park and swinging, eating fresh strawberries or extra-garlicky hummus, reading Ohmyohmyoh Dinosaurs, playing your new piano toy, and flirting shamelessly with family and friends. Least favorite things: Getting dressed, having your teeth brushed, being in someone’s lap when you want to GET DOWN, being on the floor when you want to be IN SOMEONE’S LAP, and sleeping in strange places. Your quietest times are in the mornings and evenings, when you like to snuggle with us on the sofa as we read to you or watch the news. Your loudest times are when you’re in the bath, where you excel at completely drenching whoever is bathing you. You’ve got the best smile and the most infectious laugh of any person I know, and snorgling your tummy is such a mood lifter it should probably be illegal. All of which is to say: we’re most pleased to have made your acquaintance. Happy First Birthday, little girl, and many happy returns. 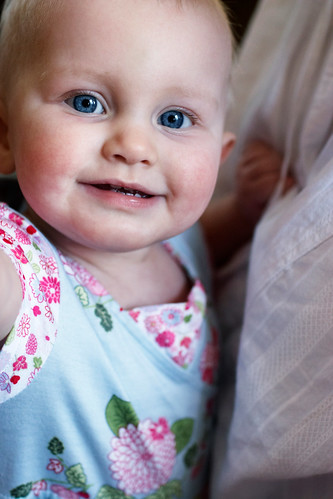