Join me for a little birthday rant, won’t you?

Look, I know that a lot of people in my age cohort who make these kinds of statements are doing it in a jokey way. Or maybe it’s a post-hipster-ironic way, or something, but whatever, I don’t care, I still hate it, because FOR REAL, it’s 2011 and I’m STILL supposed to be ASHAMED of my AGE????!! I mean, let’s be honest, even if most of the people I know are saying it as a joke, it’s a funny-because-it’s true kind of joke, only I’m not sure what’s so funny about a culture that still sends the message that at a certain age you are less valuable/desirable/beautiful/vital/important/loveable/cool/etc. And of course when I say “you” I really mean “women,” since it’s still OK for men to get older, it’s just us ladeez whose value apparently starts dripping out of our vaginas covered in XX chromosomes once we hit the big 4-0.

So anyway, everybody’s gotta do their own thing, I get it, and if feigning shame about your age (or actually being ashamed of your age) is what helps you get through the day, then … you do that. But personally, I have earned every goddamn one of these years, and I’m not going to shortchange myself by so much as a single month. I am FORTY, motherfuckers. Happy birthday to ME.

… I went and got hitched to a man who not only took my last name but also does all the laundry and gets up in the middle of the night with the kids. I totally win. Here’s a wee retrospective of the day (note: I’ve been married so long these are scans of actual film photos. If you can imagine.)

It was a beautiful afternoon in June

Look at how cute my attendants were!

That's the smile of a woman who knows she's caught a keeper.

Comments Off on Nine Years Ago Today …

Today the Hatchling had her mandatory pre-K screening at a local school in our neighborhood. You know, where they test your hearing and vision, observe you interacting with other kids and adults, check your developmental skills, and so on. It’s a way to catch certain developmental disorders and learning issues before kids are in the school system, and – in Minneapolis, anyway – it’s a time where school reps can reach out to local parents with information on all kinds of resources for their families. Great public service, totally one of the reasons I never complain about paying taxes, just generally A Good Thing.

So why, you may be wondering, was I feeling increasingly anxious and tense in my stomachular regions as the appointment loomed ever closer? Well, the short answer to that question is: BECAUSE I AM INSANE. Which is true. But also: I was kind of scared about this appointment. See, the Hatchling, while she is an amazing, joyful, imaginative, artistic, funny, lovable kid, also is, uh, not the clearest speaker in the known universe. She’s always been a babbler, but it took her longer than a lot of her friends to emerge from that awesome pre-verbal “talk” into actual words, and it’s really only in the last 6 months that she’s started speaking clearly enough that even non-family and friends can understand her. Part of the problem is that many of the kids we hang out with are preternaturally verbal, so it’s hard to know if the Hatchling is actually behind or just normal. And then, you know, sometimes when you talk to her or ask her questions it seems like she doesn’t understand you, but it’s hard to know if that’s real lack of understanding or just being three and paying attention to other (often imaginary) things. And then I read my friend Christopher’s post and thought, god, I’d *love* to have a super verbal, into-words and reading kind of kid, because *I’m* super verbal and into words and I’d know how to navigate that! And of course the Hatchling may very well end up that way, but that’s not how she is now and so I worry.

Except of course she did just great at the screening. “We’re gonna go get some screems,” she announced to her father as we left. “See ya later.” And she was awesome. Walked right off holding the hand of the screener and came back 1/2 hour later trailing clouds of glory. NO language problems; she’s right on track. Average or above average at all the verbal and math stuff. Good social adjustment, good motor skills – she’s good! Also: 45 inches tall and 56 pounds. So good and BIG. Which, as the supervisor noted, makes it tough sometimes to remember that she’s only almost four. And for an only almost four-year-old, she’s right where she should be. And what I have to remember is, while it’s good to know she’s on track, even if she weren’t, she would still be A (damn) Good Thing.

Posted on September 4, 2009 | Comments Off on School Daze

The Hatchling is starting preschool next week; this week she visited her class and met her teacher on Tuesday, and today there was a 1-hour “practice” session so the kids could get used to getting dropped off and the whole class routine. There were lots of nervous/excited parents and a couple of freaked out kids, but mostly it was a festival of cute. The Hatchling was very excited to get there and seemed OK when I left; I took the Sprout on a little grocery trip, and then headed back to the school to pick the Hatchling up. Got there and the classroom doors were still closed, lots of parents milling about in the halls. The doors open, and the teacher (Miss Jenny) comes out and says, “normally we’ll just send them out to you, but they’re pretty overwhelmed today, so if you want to come in and get them, you can.” There’s a surge of anxious kids out the door looking for their parental units … No Hatchling. The Sprout and I make our way into the class, and way over in the corner farthest from the door sits the Hatchling and a little boy in earnest conversation.

Well, OK then. After showing me the entire classroom and reluctantly agreeing to leave the dinosaurs and the magnifying glasses and the toy trucks at school, the Hatchling was persuaded to leave the room. On our way out, I asked Miss Jenny how the Hatchling had done. Miss Jenny rolled her eyes and laughed. “Oh, she’s going to be FINE. Totally made herself at home.”

Comments Off on School Daze

So the Hatchling is, for all intents and purposes, potty trained. Which: THANK GOD, because if I’d had to keep her home from preschool for still being in diapers, we both would have lost it. But I must say, it’s engendered some interesting conversations. For one thing, poop is now, like, the funniest word/concept/joke EVAR. Asked what her baby doll’s name was this morning, she responded “Poo-poo!” and laughed like a maniac. Oh, the hilarity.

And then there was this gem: she’d gone #2 in the downstairs porta-potty, so after we wiped and pulled up her underwear, I went to grab the potty so I could go upstairs and empty it in the toilet. The Hatchling, however, was not having any of it. SHE would carry the poop. Only SHE could do it. So, okay, we go to the stairs and I have several heart attacks as she precariously makes her way up, but she does it, and then she goes over to the toilet, dumps the poop in, leans over, looks down, and says, “THERE! Now you can swim!”

Comments Off on Funny. Gross, but Funny.

This past Sunday, we celebrated the Hatchling’s birthday with several of her friends. And by several, I mean we had nine – NINE – children between 1-3 at our house, along with twenty-some parent/adult types. That’s a lot of people, yo. But it was all good – the kids were remarkably well-behaved (no meltdowns!), we had enough food (and beer!) for everyone, we got to see all of our favorite people at the same time, and the Hatchling got – well, to say she got the mother lode would be an understatement. She also hit pay dirt, won the lottery, and found gold in them thar hills. We partied like it was 1999, and then we all went to bed early. An auspicious start to the twos, indeed. 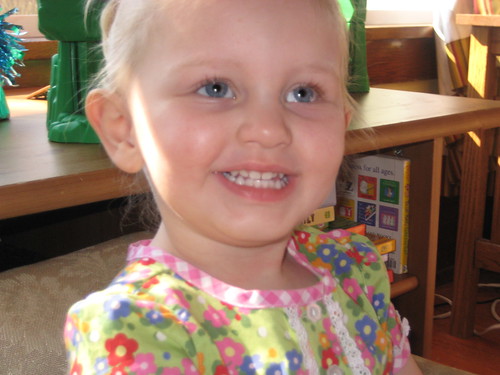 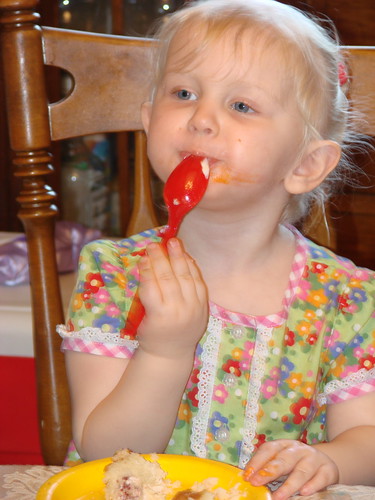 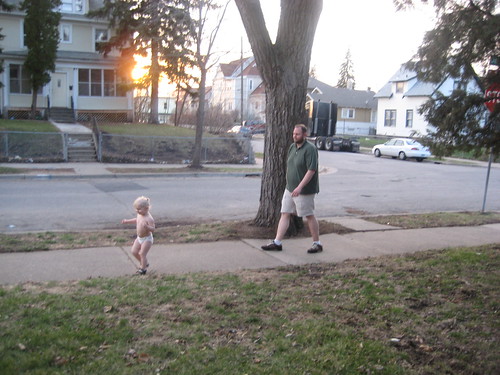 The Hatchling is now officially word-crazy, having added such words and phrases as “Go, Car, Go!” (a favorite book), “feet” (sounds like ‘phweet!’), shoe, nose, Oma, down, outside, all done and cookie to her ever-burgeoning vocabulary. Two cute things about that: one, she’s developed a pattern of asking what a thing is, and then once you tell her, she waves at it and says “hi.” It goes like this:

But. Proud as we are of her increasing linguistic abilities, she’s recently manifested a skill that eclipses even speech in her father’s eyes. To wit: yesterday, her cousin, E, was spending the day with her and my mom. E, like Mr. Squab, likey the video games, and usually when he comes over he spends a good chunk of time on the Wii or the PS3. In the afternoon he took a break for lunch or something and after a while he and Oma heard odd noises from the TV in the living room. The TV itself was off, but the Hatchling had gotten hold of the PS3 controller, turned on the game system, and – blind – started “playing” a race-car game that Mr. Squab recently downloaded. “When we turned the TV on, she was on level 4,” reported E. “I haven’t even hit level 4 yet!”

I admit that I’m not quite sure whether to be impressed or slightly horrified by this, but Mr. Squab has no such dilemma. “That’s my girl,” he responded when we came home last evening from ECFE and the Hatchling plopped herself down in her toddler-sized chair, demanded the controller, and turned on the PS3 again.

Comments Off on Maturations