So my comments system (Haloscan) went belly up, and I’m using it as an excuse to give this here tired ole blog a bit of a facelift. However, as I am strictly amateur at this interwebz design stuff, it may take a little while to work out all the glitches. Just wanted to let you know that I know the comments aren’t working and it will all be good in a few days. Or so. In the meantime, have a bear hug: 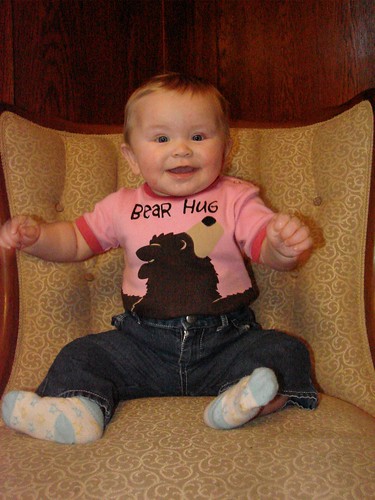 Comments Off on Ch-ch-ch-ch-changes

My mom says I have to put up a new post because every time she checks the blog she gets depressed about my anger issues. Fair point. Also … uh, how is it that I haven’t blogged in a month and a half? That was a longer-than-intended break! I guess traveling for Thanksgiving, hosting two Christmases (Christmasses?), traveling for New Year’s, cooking a ton, making a veritable shitload of gifts by hand, shopping, finishing up classes and grading, celebrating five family birthdays, hosting out-of-town guests … yeah, I guess I can see where the time went, after all. Anyhoo: Happy New Year! Does it bug anyone else that 2010 is being treated as the first year of the new decade rather than the last one of the old decade? No? I mean, I guess it doesn’t bother me THAT much. We’re not talking misusing-borrow-and-lend levels of bother. Just, you know. It’s wrong. That’s all. And how are you opting to pronounce the new year? Me, I’m going for the “twenty-ten” option. Goes more trippingly off the tongue.

Did anyone make any New Year’s resolutions? I blow hot and cold with them. On the one hand, I hate setting myself up for failure. On the other hand, it is kind of nice to take stock once a year and think about where you want to go. This year I decided against concretely measurable goals (Read a book a week! Exercise daily! Try ten new foods!) in favor of more, uh, abstract pursuits. Basically I have one resolution, if you can call it that: to become more Zen. By which I mean, essentially, to chill the fuck out about things generally, and be kinder to myself, and be more present in the moment. Frankly, making a resolution to be more Zen is a bit oxymoronic if not just flat out moronic, but there it is. I’ve always been interested in Zen Buddhism and Taoism, in particular, but haven’t had much time for it lately. But our pediatrician, who is this great guy with a sarcastic sense of humor and not at all the kind of person you’d think would be into eastern philosophy, is an unlikely Zen devotee, and once he found out I was also interested he started throwing vaguely Buddhist catch-phrases at me when I freak out about parenting things in our appointments. “Expect nothing” is one of his favorites. Like, when I’m all “the girls are going to have to share a bedroom and I don’t think it’s going to go well and they’re just going to wake each other up and none of us will ever get a full night’s sleep again but we don’t have enough bedrooms for them not to share and what should I do?” He’s all, “Expect nothing.” And I’m all, “Blink.” And he’s all, “Just do what you need to do, find out what happens, and respond accordingly.” Expect nothing is difficult for me, y’all. I EXPECT THINGS. Mostly baaaad things. Mostly in advance. And not just for myself – I can expect bad things for anyone. And WORRY about it. But I’m really trying to catch myself when I get into trouble-borrowing mode and remind myself to “expect nothing” and just do what I need to do. We’ll see how it goes, but I feel like it’s a resolution I can manage, that might also improve the quality of my life and the lives of those poor souls who have to live with my anxiety-ridden ass.

So … is this post less depressing than the previous one? I better throw in a cute baby picture just in case. LOOK! A CUTE BABY! 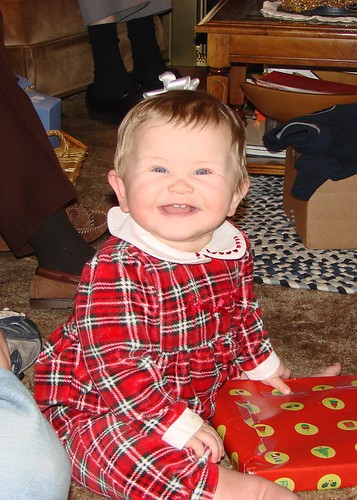 Comments Off on Well, hello.

Apparently my life is currently incompatible with blogging

Posted on June 16, 2009 | Comments Off on Apparently my life is currently incompatible with blogging

It’s not like things haven’t been happening. The Sprout turned 3 months old, the Hatchling is coming up with new catchphrases and other awesomeness all the time, Mr. Squab and I celebrated our 7th anniversary, I finished rereading the entire Harry Potter series – I mean, the days are filled. Just not so much with the blogging. However, I know I need to post a 3 month letter for the Sprout, and we also have some lovely videos in the hopper, so, um … stay tuned!! Look! Cute pictures! 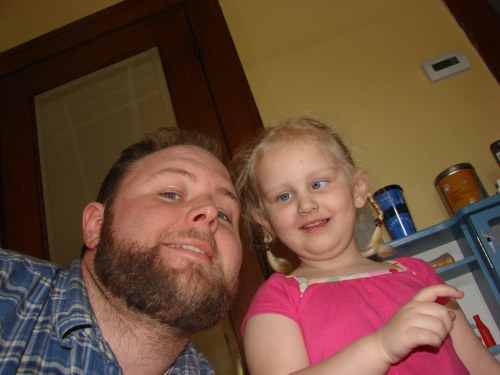 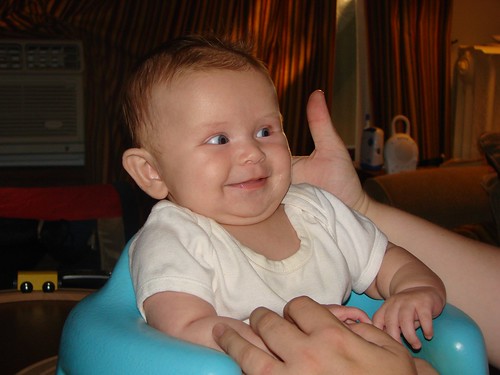 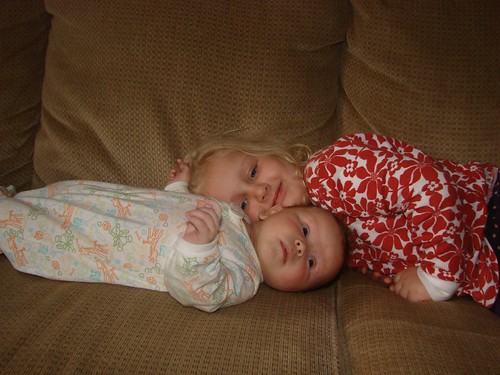 Comments Off on Apparently my life is currently incompatible with blogging

Dearest Sprout,
Well, you turned two months old on Thursday and I’m just getting to your monthly letter now. I’m guessing this is sort of the pattern with the second kid, and I hope you don’t feel lost in the shuffle. Right now a lot of your life is spent getting dragged around to your big sister’s activities. At some point you might object to this, but so far you’re remarkably accommodating about it. We hoist you in and out of your carseat, in and out of the sling, in and out of the stroller, and you sleep or look around or eat or, pretty rarely, fuss. I am in favor of this demeanor, so please keep it up. Thank you. 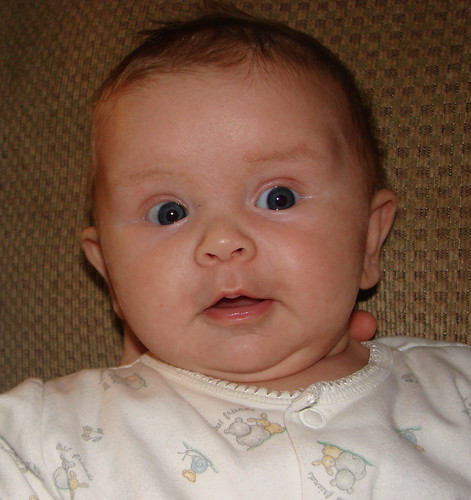 This is not to say that you’re not coming up with new tricks, however. This month you’ve added smiles and babbling to your repertoire, both of which are pretty awesome. Daddy is definitely your favorite person to communicate with – he gets the biggest grins and the longest chats – closely followed by your big sister and your other relatives, with me as a veeeerrrrrrry distant last. Which: WTF, kid? What am I, chopped liver? I only GREW you and BORE you and stuff. I mean, don’t feel obligated or anything. 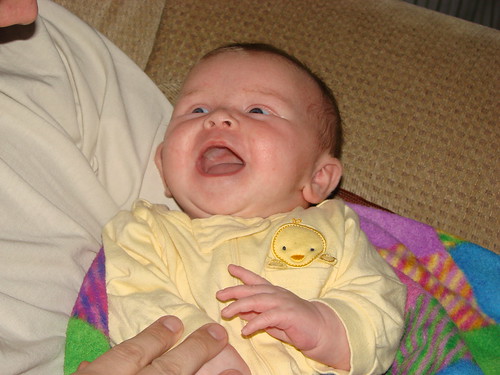 I really can’t complain, though, because the smiles and coos are pretty adorable even when they’re not directed at me. And you seem (knock wood) to have figured out your days and nights, so while we not getting tons of sleep, we are at least getting more than last month, and frankly, I’ll take what I can get. 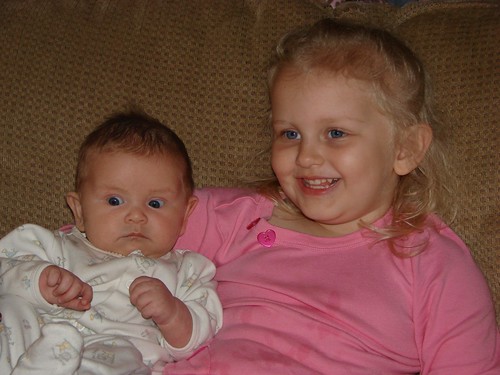 Tomorrow we’ll go get you weighed and measured and see how much you’ve grown since the two-week mark. No telling if you’ll be as off the charts as the Hatchling, but seeing as how you’re already in size two diapers and 3-6 month clothes I’m pretty sure you’ll get the stamp of approval. The nursing is going better too, so we’re mostly just using formula for when we’re out and about or if I have to leave you with Daddy for a meeting. This is especially nice at night, allowing me to nurse you without the lights on in a semi-conscious state. Mmmmm … semi-consciousness. 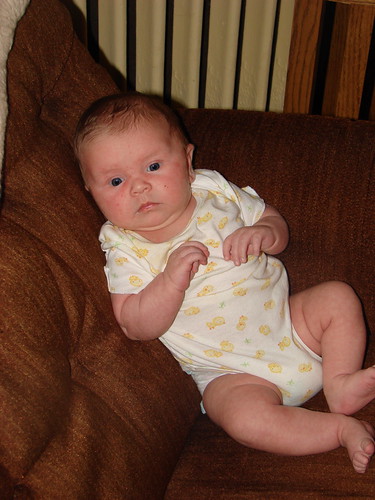 And that’s really about it for this month, kiddo. You’re doing everything you’re supposed to do. Oh, and also: You didn’t poop in my mouth this month! Which is awesome. So I think we’ll keep you. Now give me some smiles! 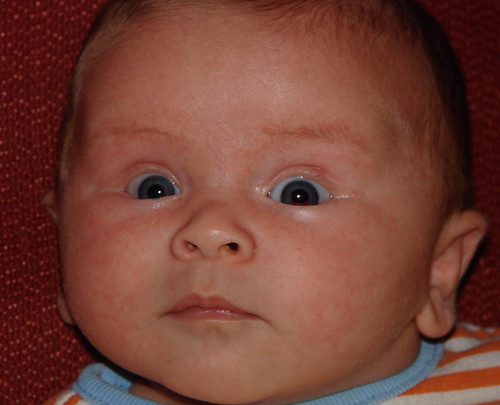 Comments Off on Two Months Old

Posted on November 4, 2008 | Comments Off on Distractions

Here are some things to distract you from those election day jitters:

2. Check out this cool NYT gadget. I love the differences between the Obama and McCain words.

3. Lookit my new nephew!! Born this very morning at 9 am. Welcome to the world, Jackson Hunter Chemay! Comments Off on Distractions

A celebration of Two-ness

We just got the Hatchling’s Two-Year photos back, and just like last year’s, they’re flippin’ adorable. I swear, if I could, I’d hire Katy to just follow me around and document my life in photos, because it would look WAY more interesting and beautiful that way. As it is, we’ll just have to settle for a yearly dose of crazy cuteness. Enjoy the slideshow.

Comments Off on A celebration of Two-ness

Oma made the Hatchling a fetching easter dress: 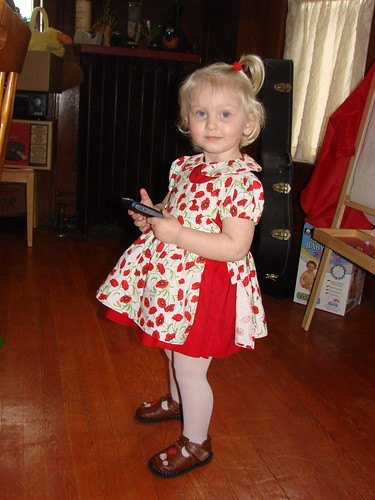 (She’s also apparently borrowed her aunt’s Treo for some quick text messaging. It’s soooo hard to keep up with one’s social obligations when one is almost two.)

Comments Off on Happy Easter!